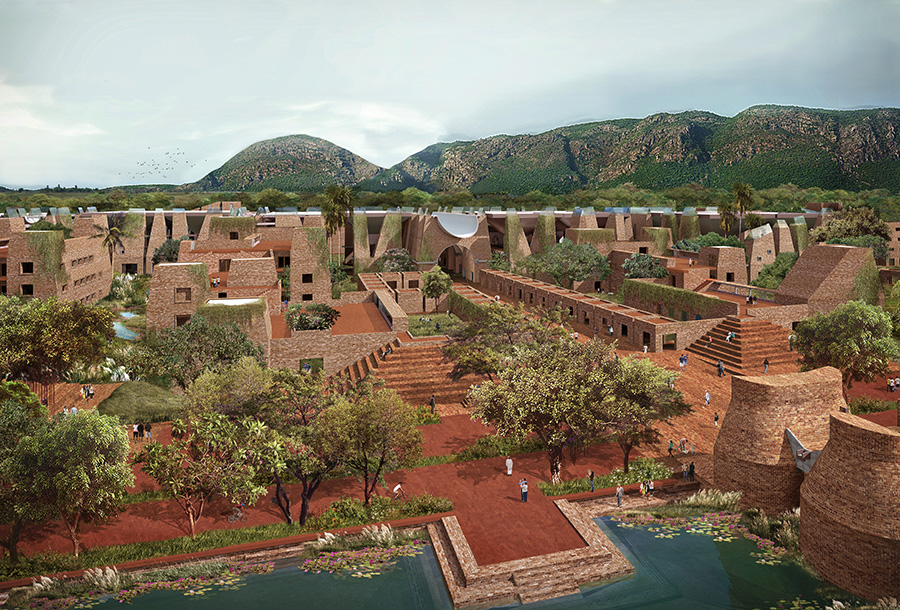 Among the greatest centers of learning in the ancient world, Nalanda University was a famous, monastic university in ancient Magadha (modern-day Bihar) in northern India. Considered by historians to be the world’s first residential university, Nalanda operated from 427 CE (Common Era) housing some 10,000 residents. In 1193 CE the campus was destroyed by invaders.

In 2006, India, China, Singapore, Japan and Thailand announced plans to revive the university and in 2010 the Nalanda University Act 2010 was passed in both the Houses of the Indian Parliament.

A new campus is being built in Rajgir, 10 km from the site of the university’s ancient ruins. In September 2014, the university opened for the first batch of students, after nearly 800 years. Designed by the Pritzker Prize-winning architect Balkrishna Vithaldas (BV) Doshi, the new campus’ design pays an homage to the ancient university reflecting the vernacular traditional forms using modern construction methods. Inhabit was engaged by Vastu Shilpa Consultants to provide façade consulting for the administration building, the library building and the main auditorium (inaugurated by the Vice President of India, Sri M Venkaiah Naidu, in November 29021).

The building’s design uses passive design principals to cool the buildings with use of thermal mass, site-made bricks and external shading features. The façade elements like double-glazed, tall enclosures with metal-clad form juxtapose with the very earthy building materials such as red masonry bricks and off-form concrete. Inhabit advised on all the glazed and metal-clad elements and their interface with the site-built elements like the masonry and concrete forms and enclosures.