After graduating from the Ecole supérieure des travaux publics and obtaining a post-graduate degree in business administration from IAE Paris, Thomas Salvant began his career in finance before switching to building engineering. He joined the OTH Group in 1994 and occupied a series of managerial posts in the Group’s Ile-de-France buildings subsidiary (health, public and overseas).

After the merger of the OTH and Séchaud & Metz groups, in 2007 he was appointed managing director of the buildings subsidiaries (Ile-de-France and overseas) of the Iosis Group.

In 2016 he was appointed executive director of the Egis Group’s buildings sector, where he is in charge of the strategy and business development of the Group’s subsidiaries in France and around the world.

Appointed to Inhabit Board of Directors: May 2019 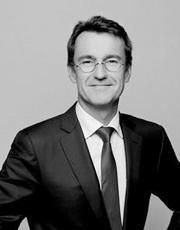